Culture shocks are the price for setting foot on our small island. Some of them result in benign anecdotes, others lead to serious misunderstandings in the workplace.

Here’s how HR and Global Mobility teams can help prevent the biggest difficulties for Indian Engineers relocating to the UK.

Deepti landed in Heathrow on Saturday evening on a flight from Delhi. She was about to stay in the UK for 15 months, working with one of her company’s clients on an ERP system implementation project. Her first day at work would be Monday, so she had a day to acclimatise in her new surroundings.

She collected her two suitcases from the carousel, made her way to the taxi stand, boarded a black cab and dozed off - it had been a long, crowded and bumpy flight.

A few weeks later, the accountant in Deepti's company flagged an expense submission to her supervisor: It was well above the allowance for this cost type.

Deepti's client company is in Brighton. She had made the whole trip from Heathrow in a black cab. The price: £270.


A world of differences

Thousands of Indian software engineers come to the UK on project assignments every year. Formally, they continue working for their employer back home, but de facto report to the British subsidiary, while working on site with a client.

For most of them, this is their first long-term stay abroad. And with it comes a range of cultural challenges, trivial and serious.

Local HR teams need to be ready and provide preventive guidance to these employees in the following cases:

This is counterintuitive to most Indian nationals. They believe that by moving to a more wealthy country, their standard of living will rise. But on the whole, the opposite is the case. Here’s how life is different in financial terms for a software engineer with a few years' experience: 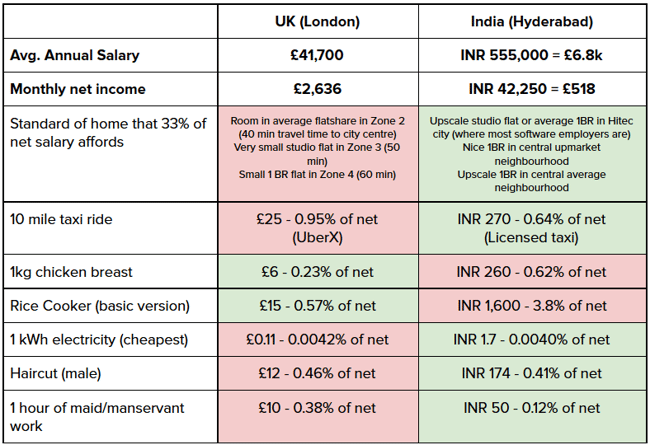 (Sources listed at the end of the article)

Not in all aspects of life are Indians better off at home - as a rule of thumb, services are cheaper at home while complex products are much more affordable in the West.

But in the most important area of rent, the average resident of Hyderabad is considerably better off than their London counterpart. Also, a maid or manservant (a much more frequently used service in India than in the UK) costs around a third of what you’d pay for a cleaner in the UK - which further decreases quality of life in the UK.

For some, the relative loss of social status can be an issue. Earning £41k in the UK places you in the 85th percentile of the population (i.e. 85% of the population make less than you). In contrast, making INR 555k back home puts you into the 99th percentile. That’s a big difference. For many people, happiness depends on how we are doing versus the rest of the population. It’s important to cater to this strange quirk of the human condition.

The upshot: Tell your Indian relocation candidates about these economic differences as part of their preparation for their long sojourn in the UK.

Unless your company will pay your relocating engineers a generous living allowance on top of their UK-level salary, they need to know what's coming.

Decide for yourself how detailed you want to be. Only mentioning it once will not register with some people. Consider providing the following thought experiment to the employee:

Taking a bus or train in India is cheap, but slow and crowded. So it’s not surprising that most affluent Indians have negative associations to it and prefer taxis. As our introductory anecdote with Deepti showed, Indian expatriates in the UK often default to taking cabs, especially when on work assignments where they get their expenses reimbursed.

But in the UK you’ll find almost everyone using public transport at least occasionally, especially in big cities. And even if our trains are far from the best compared to other developed countries (Japan, Germany, France), they still offer the best value for money in terms of speed, efficiency, and reliability.

Simply point out to your relocating employee that, when in the UK, they should always default to public transport, especially for medium distance travel, e.g. to and from the airport. Remind them of your company’s expense policy.

It’s true to the point of being a cliché - but there’s a bigger emphasis on social connections in India than in a big Western metropolis like London. We at Benivo know of many cases in our social circles who came to London for a job and had a tough 1-2 years before establishing meaningful friendships. People are more reserved over here.

This will not be as crucial for those employees who relocate with their families. But single relocaters find this more daunting.

On the flipside, this social reservation also means more individual freedom. Vinod, 29 year-old management consultant at E&Y, told us: “When I go out with my girlfriend in Bangalore and she’s wearing a short skirt, people stare at her in a hostile way, like ‘what the hell is she doing dressing like that?' In London, noone cares, and that's great.”

In any case, it’s worth mentioning this topic to your employee who is about to relocate: They will need to put in a bigger effort to find friends. Or they can look forward to releasing their inner glam-rock furry, if that's their thing.

On the one hand, the UK is one of the most tolerant and ethnically peaceful societies in the world, especially when compared to a very high degree of racism in India.

On the other, it will be a cold shower for someone from the ethnically dominant group (and being part of the economic elite) to suddenly find themselves a member of a 2.3% ethnic minority. They may experience racist acts or attitudes for the first time in their lives - and therefore, it’s worth alerting them to the possibility of it happening and reassure them of your support in that case.

The key message to convey:

That’s an odd one, we know, but it was mentioned by some of our clients as a source of chagrin for landlords and neighbours. Some food can be intensely odorous, and this can upset people living nearby. For landlords, it will be a challenge to remove persistent smells from the flat after the tenant has moved out.

This can be a touchy issue for you to bring up - it can be perceived as coming close to bigotry. But there are ways around it:

These are not things you will find in a travel guide. But we hope they are useful. Your employees will be grateful for you having told them, even if their initial reaction is surprised or negative.

So keep that in mind when you have these potentially difficult conversations. Both sides are better off with clarity early on: If some of your employees choose not to take on the assignment because of these matters, it’s great to have found this out  early in the process.

And if they don’t want to go, try turning them around by telling them that “the comfort zone is a beautiful place, but nothing ever grows there”*.

Do you have a story to share about culture shocks when coming to the UK? Write to us at hello@benivo.com. We’d love to add it to the article.

Do your employees struggle when relocating to another country? Get in touch with our expert team to help support them in their transition. Contact us on sales@benivo.com.

* we tried to find the source of this quote but it seems to be one of those that have been around forever. If you know who said it first, tweet at us @benivohq 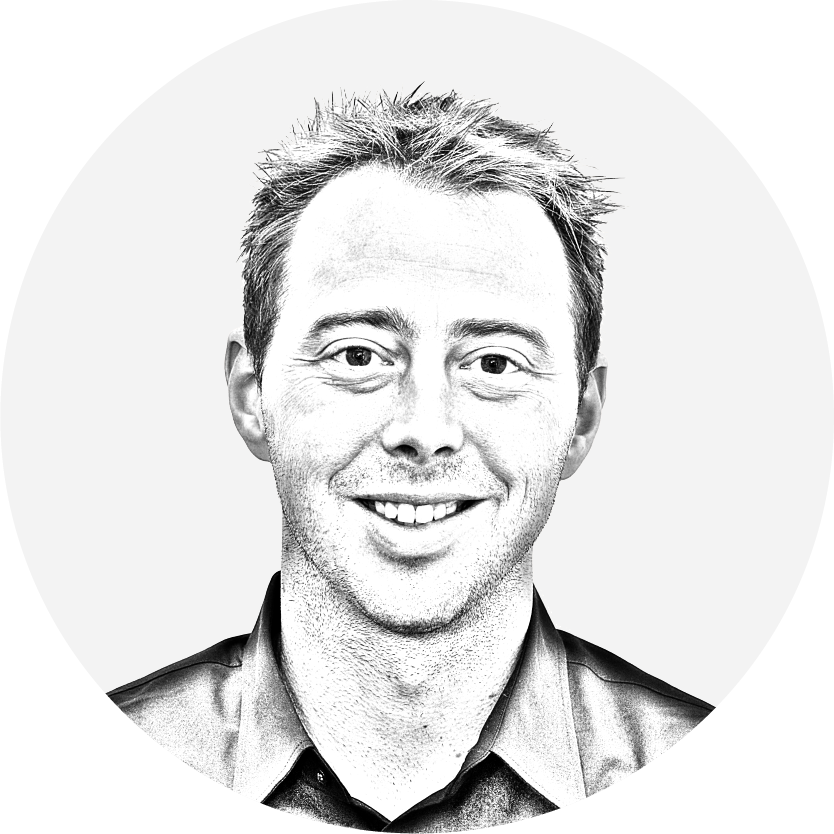